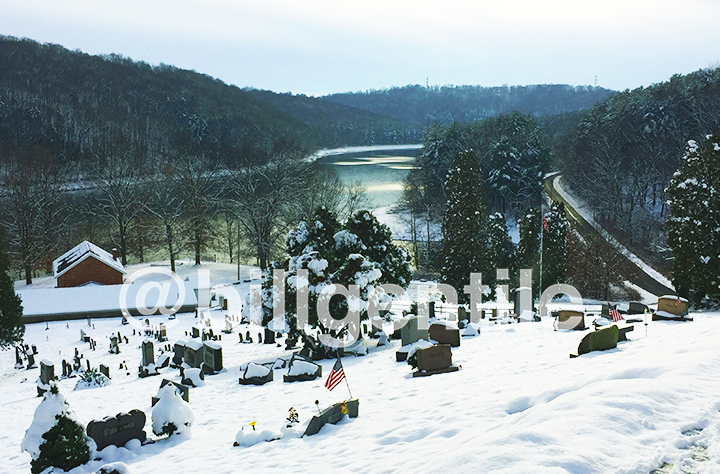 AMBRIDGE RESERVOIR, Pennsylvania — The Ambridge Reservoir was built in the 1950s to accommodate the water needs of nearby towns and villages in southwestern Pennsylvania, one of them being the town of the same name. Incorporated in 1905, Ambridge takes its name from the industry and the company upon which its inhabitants once thrived – the American Bridge Company.
The town lies right across the river from West Aliquippa, where my mother was raised in Tada’s great house along the banks of the Ohio River, a few blocks from the mills. The reservoir fills 405 acres of a valley that rests among pristine rolling woodland which by some miracle has survived the ravages of so-called development and modernity and looks much like it must have looked even before the Presbyterian church and graveyard were built on it some 200 years ago.
It’s an extraordinary place. I drive along a winding dirt road over rolling hills through thick forest and I reach the top of a ridge where the reservoir unfolds in front of me. A sparkling body of water blankets the low-lying valley. As I descend into that valley, a cemetery lies to the left and further down, a gravel-stone parking lot lies beside the old church. Parallel to the water’s edge is a paved road running 1.5 miles to a nearby highway.
I was introduced to the reservoir by a high school friend who had just returned from a few years on the West Coast where he became an avid runner and where he picked up a yellow, smiley-face tattoo on his shoulder while hanging out on a Native American reservation way before tattoos became the rage they are today. We began to visit this place on a regular basis, to jog along that paved road.
I introduced my brothers to the reservoir and, over the years, it became a special, sacred place for us. We came here not just to run but to commune. To draw close to each other. My older brother called it our “de-militarized zone” where pretenses were dropped and where we let our guard down. It was along this paved road where we revealed secrets, confessed our feelings and discussed our lives and the lives of our family members. Summer or winter. Spring or fall. No matter the weather or how late we stayed up drinking my brother’s homemade wine the night before, we found time to jog at the reservoir.
I sometimes came here alone, to find solitude and refuge in times of trouble or doubt. It was here where I celebrated life, love and renewal. And where one day I would come to mourn.
(Copyright photo by ©Bill Gentile)
Xxx
NOTE: The excerpt above is one of a series preceding the release of my memoir, “WAIT FOR ME: True Stories of War, Love and Rock & Roll.”