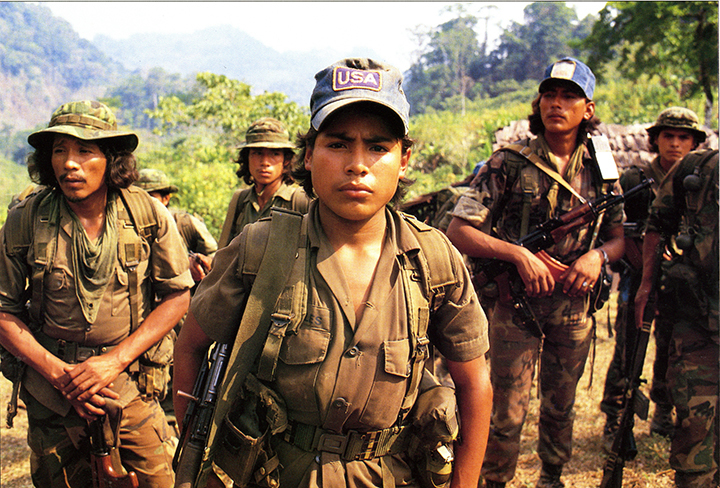 WASHINGTON, DC, 17 July 2022 — The Contra War unfolded almost exclusively in the country’s northern mountains bordering Honduras with minor incursions from Costa Rica led by Sandinista defectors. Fighting never really came to the capital, which posed special challenges for people like me who wanted to cover the conflict. To do so, I had three options: (1) Insert ourselves into units of the Sandinista People’s Army fighting in the northern mountains. (2) Embed with contra fighters infiltrating Nicaragua from bases in Honduras. (3) Respond to reports of fighting or other conflict-related activity that too often became public days after the event had occurred.

To really cover the conflict, I had to spend inordinate amounts of time roaming the mountains with one or the other of the armed groups, sometimes for weeks, before seeing any real action. And “real action” means the ugly reality of men killing and being killed with high-powered weapons capable of tearing through human flesh and bone with ferocious, stunning, horrifying efficiency.

I was based in Managua from 1983 through 1990 so I spent most of my time on unpaved mountain roads searching in northern Nicaragua for stories and images in my 1969 International Harvester Scout (I called it “La Bestia,” or, The Beast) and tramping through hills and valleys with Sandinista troops. (La Bestia is pronounced Lah BEST-ee-yah). Most journalists didn’t have the luxury of time, the physical and mental stamina, or the will to spend long days or weeks in the mountains, risking death and permanent disfigurement, drinking untreated river and stream water, eating cold rice and beans or the occasional cow or monkey that the young Sandinista soldiers or contra rebels hacked up for meat, and relieving themselves in awkward, semi-public circumstances.

There were very few pitched battles between the two armed groups. Instead, the war played out in a series of ambushes or surprise attacks preceded by long stretches of slogging through tropical highlands through ankle-deep mud wearing the same wet, filthy, stinking clothes and humping backpacks stuffed with everything I could carry inside plastic bags to protect my precious camera gear and film from the elements. I walked for days under a burning sun or a tropical downpour in the middle of the jungle and in an instant fights erupted and men began to bleed. Then I slogged again, sometimes documenting young Sandinista soldiers or contras hauling their wounded and their dead.

The Contra War resembled the Vietnam War more than it did the Sandinista-led revolution of 1979. And it was on those long journeys in Nicaragua’s tropical highlands that I would begin to implement some of the lessons of Guy Gugliotta, the Swift Boat commander turned newspaper man, for surviving guerrilla warfare.

Perhaps as importantly, I drew deeply from the examples and the standards set by the men and the women who informed my “permanent constitution.” Those who labored in the steel mills, who made things with their hands, who coaxed food from the land, took care of their families. Those who went off to fight for their country in times of war, the men and women who stood their ground and never backed down, and who waited for their loved ones to return.

When embedded with the Sandinistas, the best place to position myself was at the tail end of the exploradores (explorers or scouts), a handful of men trained to lead a column of soldiers in single file through the mountains without stumbling into an ambush and untimely demise. If an encounter did take place, the explorers ordered the men to fan out to the flanks and counterattack. Placing myself at the end of the scouts gave me the chance to make pictures of men actually firing at the enemy, without exposing myself to the extreme risk of being at the front of the column to be taken out like a duck in a shooting gallery. Positioning myself too far to the rear of the single-file line could make it impossible to capture powerful images.

Covering the war from the contra standpoint was a bit trickier because, unless I accidentally ran into them or was stopped by them at a checkpoint in the northern mountains, I had to go to Honduras where they were based and get permission from the U.S. Embassy to enter those bases along the southern border with Nicaragua. Why? Because it was the U.S. Embassy that was directing and supplying the anti-Sandinista operation. With embassy permission, I could enter the contra training camps along the border and, if I wanted to, head south into Nicaragua with the contras on what could be a grueling and perilous incursion into the war zone. And that could take weeks.

Wait for Me now is available in hardcover, paperback, Spanish, English, Kindle and audio. See https://tinyurl.com/43ue53c3