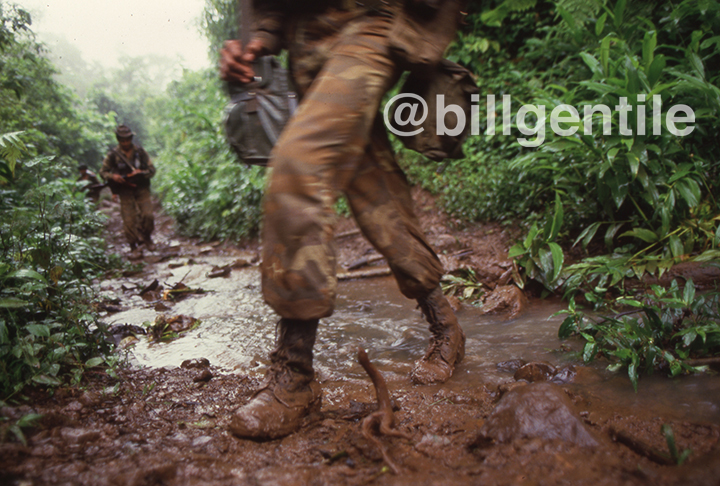 LA MONTANA, Nicaragua, 1980s — The mountains of northern Nicaragua enjoy a mystique all their own. Nicaraguans refer to them not in the plural, “the mountains,” but in the singular, “La Montaña,” or “The Mountain,” as if the rugged backbone of the country were a single entity, one special realm apart from, but still within, Nicaragua.
Despite the hardship and danger, La Montaña occupies a special niche in Sandinista lore, the legendary tales of any guerrilla group being part of the heart and soul of that movement, and the reason why men and women risk torture and death for that movement. It was to La Montaña that the Sandinista Front sent its guerrillas for physical, psychological and political training. It was in the merciless Montaña that the Sandinista cadres endured a sun that pulls blisters from forehead and nose; cold, wet nights that shake the body ’till dawn; hunger that disorients and hurts; solitude that makes men talk to themselves; and fear that takes their breath away. In La Montaña lurk typhoid, malaria, hepatitis, anthrax and “mountain leprosy,” a parasite that embeds itself in human flesh and eats away at it in concentric circles leaving pain and ugly scar tissue. At night La Montaña comes alive with sounds that spooked the hell out of me. Howler monkeys do exactly that. They howl, or roar, with voices both lamenting and intimidating that ricochet for miles through dense rain forest. I woke up in my hammock one night while on patrol with the Sandinistas, startled by the chorus of animals talking to each other in the forest. They were sounds I hadn’t heard since my university days, when fraternity brothers and I listened to the 1969 Pink Floyd song, “Several Species Of Small Furry Animals Gathered Together In A Cave And Grooving With A Pict.” (https://www.youtube.com/watch?v=GpWJv7alqQE) The low-lying plains at the base of La Montaña is cattle country and home to nasty, inches-long pests that Nicaraguans call, “tórsalos.” They normally thrive under the skin of free-ranging cows but sometimes take up residence in humans. One of my colleagues had them removed by a physician who sliced open his skin to dig them out. I contracted a case of anthrax while working in the same region.
—
NOTE: This excerpt is one of a series preceding the release of my upcoming memoir. The manuscript is sub-titled, “A True Story of War, Love and Rock & Roll.” Read more when the book is published.
In the picture, Sandinista soldiers on patrol slog through mud after tropical rain storm. (Photo by Bill Gentile)