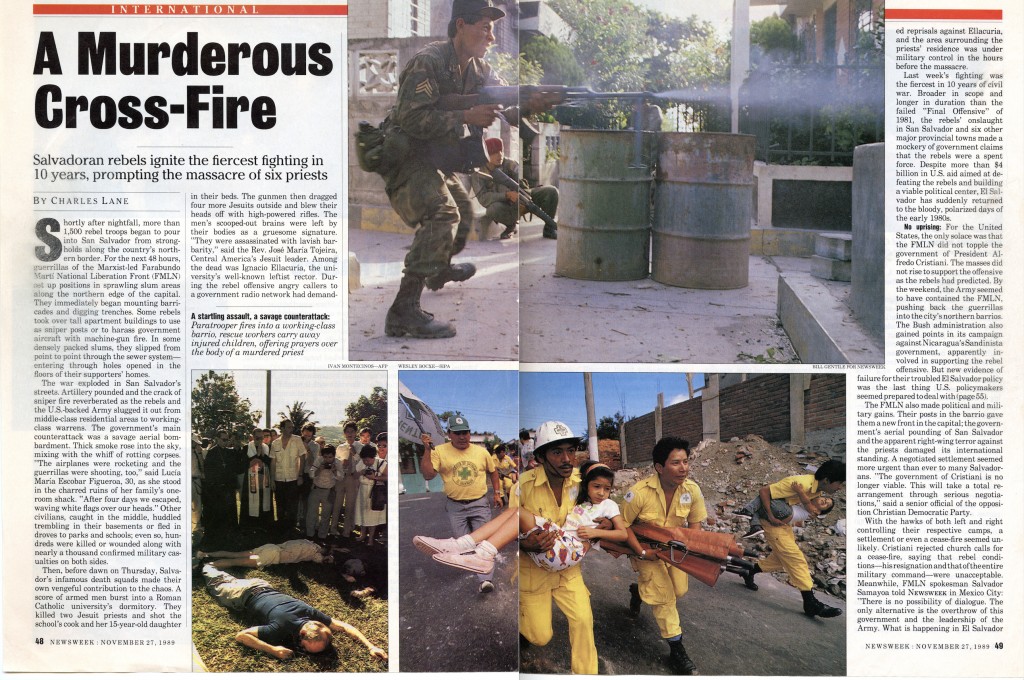 SAN SALVADOR, El Salvador, 1989 — I never liked El Salvador. It had extracted too much blood from too many people and too many of its victims were my friends and colleagues. A tiny and overcrowded country, El Salvador had a menacing, sinister feel about it. Death squads prowled the streets at night and frantic, heartbroken family members combed the city dumps each morning in a desperate search for their loved ones.
Even the Metropolitan Cathedral in the capital San Salvador where Archbishop Óscar Arnulfo Romero delivered his sermons ordering government forces to “stop the repression,” made me uneasy. Its interior walls were unfinished concrete, giving the place a cold, cavernous, medieval feeling. The gray exterior was graceless and looked nothing like “the house of God” where my Italian immigrant parents took me to mass every Sunday as a child.
I spent a lot of time in El Salvador covering the civil war and elections there. I had to. Not only was El Salvador a part of my immediate area of coverage, but it was linked organically to Nicaragua. In fact, every country in Central America was linked to others in the region. Almost nothing happened in one country without rippling into others: weapons, training camps, fighters, spies, refugees, wounded and, eventually, cocaine.
Every time I traveled to El Salvador, my stomach tightened from the minute I touched down on the airport tarmac until the time I was on an outgoing flight leaving Salvadoran airspace and asking the flight attendant for another glass of just about anything with alcohol in it.
Covering conflict in El Salvador was extremely dicey. It’s one thing to be embedded with the Sandinistas or with the anti-Sandinista contras. Either side protected me precisely because I was embedded with them. They protect themselves as best they can and, by doing so, they protect me as well. It’s quite another thing to arrive at an ongoing firefight and insert myself deep enough into the fight to make powerful images.
And that’s exactly what I did. El Salvador was so small and the conflict so ubiquitous that, after hearing a radio report about fighting in just about any corner of the country, I could jump into a taxi and haul ass down the road to cover it. Unlike print correspondents who can do their work from a distance or by following up after an important event, visual journalists have to be on site and on time when and where the shit is actually hitting the fan. Because that’s where the pictures are.
Xxx
NOTE: The excerpt above is one of a series preceding the release of my memoir, “WAIT FOR ME: True Stories of War, Love and Rock & Roll.”
NOTE: In this Newsweek magazine spread of November 1989 is an image I made of street fighting between Salvadoran troops (above center) and anti-government guerrillas.