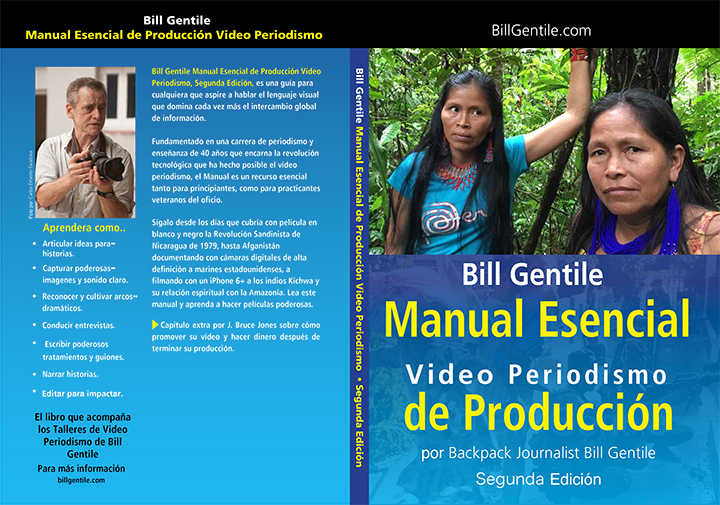 WASHINGTON, DC, 3 August 2016 — I’m delighted to announce that the Spanish-language version of my acclaimed “Essential Video Journalism Field Manual” is nearly ready for release. The “Bill Gentile Manual Esencial de Producción Video Periodismo” is in the final stages of review and should be available at Amazon.com by next week.

Translated by my wife, Esther, the manual will be used this Fall semester by American University (AU) students taking my course, “Backpack Documentary en Español,” the first-ever, all-Spanish-language class to be taught at AU’s School of Communication. Esther and I are proud and honored to present this manual to all who aspire to learn the craft of backpack video journalism, particularly those who speak Spanish, the language most spoken in the United States after English.

The release of the Spanish-language manual comes on the heels of the second edition of the English-language manual. Both editions include a bonus chapter, by Internet marketer J. Bruce Jones, on how to market videos.

I launched the Backpack Journalism Project at the School of Communication in 2010 to inform and inspire students about the craft, alternately referred to as “video journalism,” “backpack journalism,” or “citizen journalism.” To see examples of the craft, you can view, “When the Forest Weeps,” (https://www.youtube.com/watch?v=Wgqh6PGw1lg) which I shot, produced, wrote and narrated in 2015 while on assignment for American University’s Center for Latin American and Latino Studies (CLALS). My recent work also includes the 2015 documentary, “Afghan Dreams,” which I largely shot, produced, wrote and narrated, about four Afghan law students – all female – who defy all odds to compete in the world’s most important competition of international commercial law. In 2013, I shot, produced, wrote and narrated a three-part film series on religion and gangs in Guatemala. The three films, “I. The Gangs,” “II. The Researcher,” and “III. The Pastor,” are viewable on YouTube here, here, and here.

In addition, you can see student work at http://www.american.edu/soc/backpack/index.cfm