ST. PETERSBURG, Russia, 31 August 2013 – We arrived at the airport in St. Petersburg on Wednesday 31 July for the 4th meeting of the U.S.-Russia Bilateral Presidential Commission (BPC) Sub-Group on Mass Media. The draft agenda for the two-and-a-half day meeting included discussions on citizen journalism, journalism education and training, and media coverage/perceptions of Russia and the United States.

I delivered a presentation on “citizen journalism,” a methodology I’ve been teaching and preaching for some time now, and a methodology made possible largely by the revolution in technology. I screened a couple of pieces made by students of mine in Cuba. We discussed how young people in particular, equipped with hand-held digital tools, now communicate globally, instantly and in a language, the visual language, that everyone can understand.

It’s the same language that I teach in my classes at American University, and in my Video Journalism Workshops. See http://videojournalismworkshops.com

The BPC framework includes 20 working groups, including one on Education, Culture, Sports and Media (ECSM).  This strategic dialogue was the fourth gathering of the Sub-Working Group on Mass Media and was held in St. Petersburg, Russia, from July 31 through 3 August 2013.  The first three meetings were held in Boston (March 2011), Moscow (October 2011), and Washington, D.C. (October 2012).

At the first meeting’s conclusion in Boston, the delegates agreed to create a platform to exchange information on a regular basis through electronic media.  The second meeting of the sub-working group in Moscow culminated with the announcement of a two-year exchange program of 24 young journalists operated by the International Center for Journalists (ICFJ) and the Moscow Union of Journalists, with support from the John S. and James L. Knight Foundation.

Last year’s meeting in Washington, D.C. focused on the three main themes of the sub-working group: the Business of Media; the Evolving Profession of Journalism; and New Media Technologies.  Expert speakers led discussions on ethics, entrepreneurship and education, and the expanding role of social media.  The agenda also included site visits the White House Press Briefing Room, the Washington Post, and the Newseum. 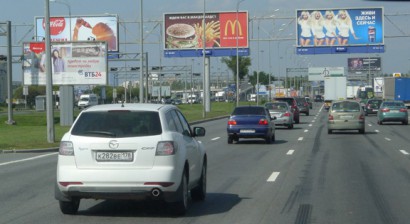 Above, on the ride from the airport to the hotel I notice that capitalism has gained ground in the former Soviet Union. 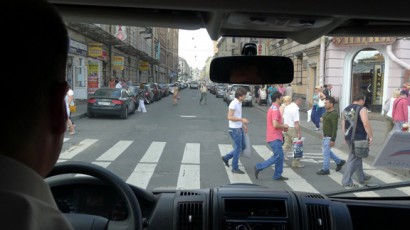 St. Petersburg is a fascinating and beautiful city, with wide avenues, beautiful architecture and miles of water canals.