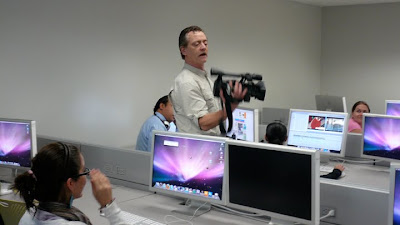 The workshops are sponsored by the U.S. State Department and the Fundacion Mexicana de Periodismo de Investigacion (MEPI), or the Mexican Foundation of Investigative Journalism. The workshops are being held at the Tech de Monterrey campus in Mexico City.

The workshops have even generated some interest among the local media outlets, which are just beginning to probe the model that we refer to as backpack journalism, or video journalism. The newspaper El Universal carried a story about my visit. See the story here.

While here, I’m helping with the official launch of the Foundation.