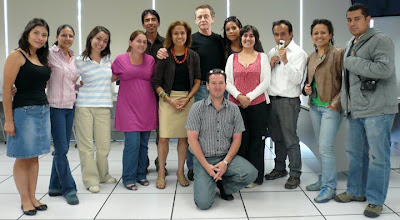 MEXICO CITY, 1 May 2010 — Here’s the first graduating class of our Backpack Journalism Workshops in Mexico City. This group included working journalists, mid-career professionals in other fields and students. What a great group of highly talented, motivated people. It was such a pleasure to work with them.

This was the first of two, three-day workshops I’m conducting in the Mexican capital. We finished up late yesterday evening.

The workshops are sponsored by the U.S. State Department and the Fundacion Mexicana de Periodismo de Investigacion (MEPI), or the Mexican Foundation of Investigative Journalism. The workshops are being held at the Tech de Monterrey campus in Mexico City.

All of this has been made possible by Ana Arana, a colleague of mine from my days in Central America. She is the founder of MEPI. In the photo, she is seen directly at my right. While here, I’m helping with the official launch of the Foundation.

The workshops have generated quite a bit of interest among the local media outlets, which are just beginning to probe the model that we refer to as backpack journalism, or video journalism. The newspapers El Universal and La Reforma sent reporters to attend the first event. El Universal carried a story about my visit. See the story here.