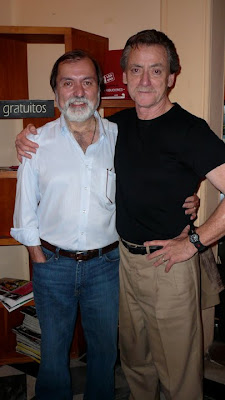 MEXICO CITY, 4 MAY 2010 — It’s an honor to be in Mexico City, with Epigmenio Ibarra, helping to inaugurate the Mexican Foundation for Investigative Journalism. During and after the panel discussion that we led, I discussed the craft of backpack journalism, or what some refer to as video journalism, with some of the attendants.

As I told the crowd gathered at the launch, “Epi” was the first backpack journalism that I’ve ever known. In Central America during the 1980s, when the American and European television crews consisted of camera person, sound person, correspondent and producer, Epi was covering the conflicts alone, doing all those tasks — and doing them very well. He was the embodiment of what we define today as a backpack journalist, or video journalist.

Today Epigmenio is a wildly successful producer of Spanish-language soap operas or “telenovelas.” His are distinguished by the fact that they have a social component, a characteristic very distinct from the run-of-the-mill Mexican television programming. I take my hat off to him.