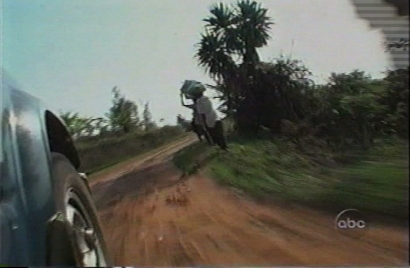 WASHINGTON, DC, 30 September 2010 — Learn to document your story as it moves from one scene to another. Always shoot the journey, be it by foot, car, plane or train. Shoot your character’s feet hitting the pavement, hands on the steering wheel, face in the rear view mirror. Shoot through the windshield for the POV shot. Then shoot out the window as the scenery passes by. If possible, shoot the character moving into frame and out of the frame. Shoot him/her walking down the path. Down the alley. Across the road. From one scene to another. All this allows a smoother transition between scenes, and provides an opportunity to construct another dramatic arc. Before he/she leaves, ask, “Where are we going?” En route ask, “What are we doing now?” Upon arrival ask, “Where did we just get to?” (Photo by Bill Gentile from ABC’s Nightline With Ted Koppel, “Voice of Hope”)