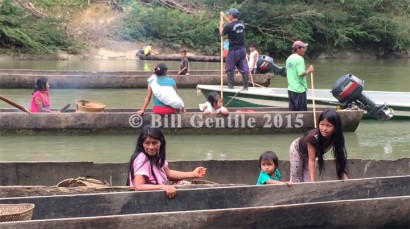 SARAYAKU, Ecuador, 1 July 2015  This is one of the more extraordinary scenes I captured during my three-week visit to the Ecuadoran Amazon. Here, in the autonomous, indigenous region of Sarayaku, Kichwa Indians of the seven communities that make up the region join a fishing expedition on the Bobonaza River.

Members of the communities pepper the river with the leaves of specific plants that induce a temporary state of semi-paralysis in fish, allowing the villagers to capture them with harpoons, nets and even machetes. Both a solemn and a joyous occasion, the harvest once was held each year. But the dwindling stock of fish has forced authorities in Sarayaku to limit the event to once every two years.

I went to Ecuador on assignment for American Universitys (AU) Center for Latin American and Latino Studies (CLALS) to do a short film on religion and the environment. The Kichwa Indians who live in this area have a special relationship with the jungle. While explaining that relationship, my Kichwa guide referred to the jungle as the mother, from which life emanates. Its more a spiritual relationship than a religious relationship.

My guide also explained how this region has come to be known as the epicenter of resistance to efforts by the Ecuadoran government and foreign petroleum companies determined to extract oil lying underneath the jungle floor. Ill have more on my guide, Gerardo, in future posts and, of course, in the films that emerge from the post-production process in which I am engaged right now.

What a fascinating process: reviewing, watching transcribing hours and hours of video to make the final products. In my Backpack Documentary classes at American Universitys School of Communication, I refer to this process as the creative treatment of actuality, or the creative treatment of reality. Thats what Im doing now. Figuring out how I can treat the trove of moving images and sound that I captured during my journey to one of the richest forests in the world.

Thanks for following this journey.