Raise Your Voice With Optimal Sound 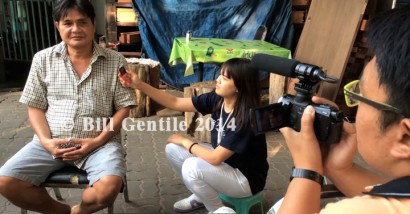 BANGKOK, Thailand, 14 December 2014  As I say frequently during my Backpack Documentary classes at American University as well as the Video Workshops that I conduct around the world, sound is the heartbeat of documentary. It is so important that viewers often will forgive images that are slightly out of focus or improperly composed, but they wont forgive bad sound.

I had the occasion to work in the field with some of the students in my Bangkok Video Workshop, and one of those occasions illustrated how to effectively use basic equipment to gather optimal sound in the field.

One of the students was doing his story on craftsmen who make the metal pots in which Buddhist monks accept offerings of support from the general public. Its a craft that rapidly is being outpaced by technology, the hand-made metal pots being replaced by cheaper, plastic substitutes.

The student interviewed two of the craftsmen who make the pots. Located between a busy street on one side and a quiet canal on the other, he positioned himself with his back toward the busy street and his directional microphone toward the canal. Just to be sure, he had another student hold a small recorder to his subjects, just out of site of his camera frame.

The results were impressive. He was just close enough to capture good sound and didnt need the sound from the small recorder. You can hear the result in the first clip of this short video. In the second clip, I move to the side, with my iPhone microphone pointed toward the street  and the sound practically overwhelms the interview. In the last clip of the film I am behind the subject being interviewed, and the ambient sound almost completely wipes out the interview.

So the next time you head out to the field, pay attention to the source of the sound. And point your directional microphone away from that sound. Be sure you are close enough to our subject so that the ambient sound doesnt overwhelm the interview. And please, please, use earphones, so you can actually hear what you are recording.

They learned how to establish their presence on the Internet, using the videos they produced during our event.

And they learned how to create community, to connect with other communities, to cultivate these communities, and to join the international dialogue about issues that are important to them, their families, their communities and the countries where they live.