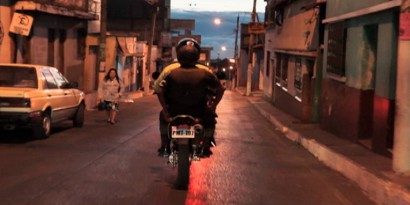 WASHINGTON, DC, 28 July 2013 — We’ve finished editing the three-part series on Guatemalan gangs. Above, a joint patrol of Guatemalan police and army scours the mean streets of Guatemala City in an effort to quell the gang violence that has plagued this Central American nation.

The three pieces will air in the next few days. I shot and produced the stories on a trip to Guatemala earlier this year. I was on assignment for the Center for Latin American and Latino Studies (CLALS) at American University. Like so many other non-profits, the Center is turning more and more of its attention to video as a means to distribute its message. And most of them are looking at the model we refer to as backpack video journalism.

The three pieces are classic examples of backpack video journalism. I was on assignment with Robert Brenneman, author of “Homies + Hermanos: God and Gangs in Central America.” Brenneman is Assistant Professor of Sociology at St. Michael’s College in Colchester, Vermont. I spent 10 days with Brenneman as he conducted a follow-up round of research on gangs.

Follow us this week to view the pieces, titled, “The Gangs,” “The Researcher,” and “The Pastor.”