Talking With the Amazon at American University 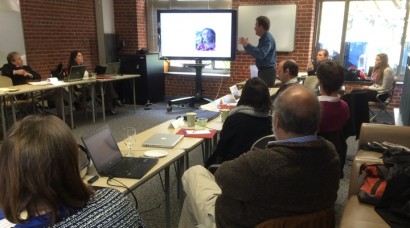 WASHINGTON, DC, 7 November 2014 — Professor Tod Swanson of Arizona State University addresses participants of a workshop organized by the Center for Latin American and Latino Studies (CLALS) at American University. The workshop was titled, “Religion and Democratic Contestation in Latin America: Rights and Justice Claims around the Environment and Gender/Sexuality.”

Dr. Swanson spoke to the group about how his work on Amazonian religion seeks to understand how heightened empathy with plant and animal species is believed to mediate emotional relations to family and community.

I hope to work again with the CLALS on the current round of research. My first collaboration with the Center included a trip to Guatemala where I produced three videos on God and gangs in that Central American nation. You can see them: