The Epicenter of Resistance 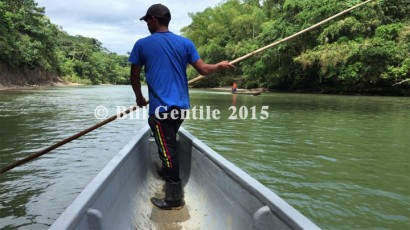 CANELOS, Ecuador, 29 June 2015 — This is how my journey to the epicenter of indigenous resistance to oil drilling in the Ecuadorian Amazon began — a five-hour canoe ride down the Bobonaza River in Ecuador’s “Oriente” region, rich in oil and other natural resources. I traveled to Sarayaku, an autonomous region of this South American country. There, Kichwa Indians for decades have resisted the advances of the Ecuadorian government and foreign corporations to allow oil drilling and “development” in their homeland. This is why both the inhabitants of the region as well as the Ecuadorian government consider it the “epicenter” of resistance.

The trip to Sarayaku is especially timely because of the Vatican’s recent encyclical defending the environment and the poor. Pope Francis on Sunday 5 July landed in Ecuador on the first stage of a three-country visit to South America, bringing with him the Vatican’s message of concern for society’s most defenseless and the world  they live in.

The journey to Sarayaku came at the tail end of a three-week trip to the region. I was on assignment for American University’s (AU) Center for Latin American and Latino Studies (CLALS), and charged with producing a short film on religion and the environment. I’ll keep you up-to-date on the post-production as it unfolds.

Because I anticipated some difficult conditions in the jungle, I trimmed down the gear and shot the film with an iPhone 6+, equipped with the FiLMiC Pro app, and directional as well as wireless microphones, which I used interchangeably. I had to buy some other gadgets, as well, and I’ll discuss that in later posts.

In addition to the technical issues, the Amazon presents challenges unique to itself. These include heavy rains, muddy pathways, questionable food and water supplies, plus spiders, scorpions, serpents and poisonous, stinging ants.