Why We Do This: “Inside the Solar” 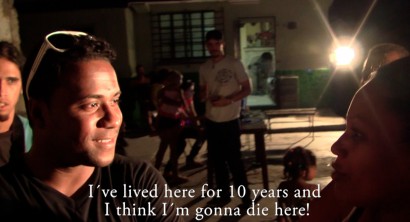 WASHINGTON, DC, 23 September 2010 — This film depicts the real reason we journalists do what we do. It is titled, “Dentro del Solar,” or “Inside the Solar.” In Cuba, a “solar” is a public housing unit, or tenement, and Solar del 11 is one unit in Havana portrayed in a film of the same name and produced by two young Cuban video journalists.

You can see “Inside the Solar” HERE.

“Inside the Solar” is a sequel to the original film, “Solar del 11,” done by Maria Elisa Perez and Duniesky Canton Fernandez. After shooting the original mini documentary, Maria Elisa and Duniesky returned to the solar to show and to share their work with the building’s occupants. The filmmakers wanted to give something back to the residents in return for the trust granted them during the filming.

And this goes to the heart of why we journalists do what we do — and why we don’t. I was deeply unsettled by a recent discussion between some of my colleagues debating the motivations behind our craft. Do we do it for the money? Or to be macho? Or for bragging rights like, “I was there”? Certainly there are elements of this. But for me, at least, the real reason is because of the connections I’ve been able to forge with the people who have allowed me to practice our craft. The soldiers and rebels in Central America who allowed me to tell their stories and to spend weeks at a time with them trekking through mountains and treading mean streets. The campesinos who volunteered their perhaps unsophisticated but almost always true-to-the-core analyses of their individual and collective predicament. The women in Rwanda who recounted — on camera — the horrors of mass, systematic rape during the 1994 genocide. The U.S. Marines in Afghanistan who granted me the privilege of documenting their far-off war. These are just a handful of the “reasons” that have kept me in the craft since I began practicing it in 1977. These relationships, friendships really, are the real “payoff” for long, cold separation from family; for exposure to extended bouts of ugly, ferocious violence; for the loss of friends and colleagues killed or wounded while practicing the craft; for personal lives disrupted by forces mostly beyond our control but to which we must submit ourselves to do our job.

“Don’t get into this business for fame and fortune,” I tell my students at American University. “Because there isn’t enough of either to justify the price that you’ll have to pay. Do it for the right reasons,” I tell them.

And I’m delighted to report that the Cuban visitors are doing it for the right reasons. Maria Elisa and Duniesky released both films while on a tour of Washington, DC. “Dentro del Solar,” or “Inside the Solar,” is their way of giving back. And now they are seeking ways to generate support for the inhabitants of Solar del 11. They want to make a positive impact on their lives — beyond the impact they’ve already made with their films.

Their visit is sponsored by American University’s Center for Latin American and Latino Studies (CLALS). The Cubans are visiting the United States for the first time to screen the documentaries. This trip marks the first time either of them has visited a foreign country.

Maria Elisa and Duniesky made “Solar del 11″ during a Backpack Video Journalism Workshop that I conducted at the Advanced Institute of Art (ISA) in Havana during fall semester 2011. It was then that I accompanied a group of AU Abroad students studying in Cuba, and taught my “Photojournalism and Social Documentary” course. CLALS Director Eric Hershberg funded the workshop and the trip to the United States with a grant from the Reynolds Foundation.

In addition to screening their film at a number of events at American University, the two Cuban documentary filmmakers visited other institutions in the region, including the College of William & Mary in Virginia. They just returned early Sunday morning from touring New York City with my Cuban-born wife, Esther. They depart Washington, DC, on Monday.