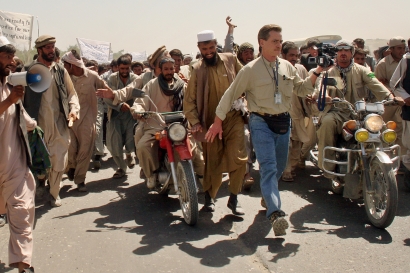 WASHINGTON, DC, 26 February 2011 – The technological advances driving the revolutionary model that we refer to as backpack video journalism enable a single practitioner to exchange ideas and information as never before in the history of mankind.

But there is a dark side to this methodology, which empowers lone practitioners to document and disseminate information from the most remote corners of the world. It’s the yin and yang of backpack video journalism: A single practitioner now can generate broadcast-quality stories for television or the Internet, but precisely because that practitioner works alone, he or she is more vulnerable to attack by opponents of the free exchange of ideas.

We live in a different world. During my years of covering conflict for United Press International (UPI) and Newsweek Magazine in Latin America, the Caribbean and the Persian Gulf, attacks on journalists were relatively rare because most of the protagonists understood the importance of how they were perceived by the rest of the world. But today many key players rely on the Internet to affect how the world perceives them. And others see the media, especially Western media, as part of the problems affecting them.

Now, and especially in light of stories from the Middle East about assaults on female journalists, backpack video journalists must be hyper-vigilant as we practice our craft. Working alone allows us to document events while being as non-intrusive as possible. But it also makes us more vulnerable to violence from the dark side.

So the first safety precaution is awareness – of our surroundings, of the people we cover and of measures we can take to be safe.