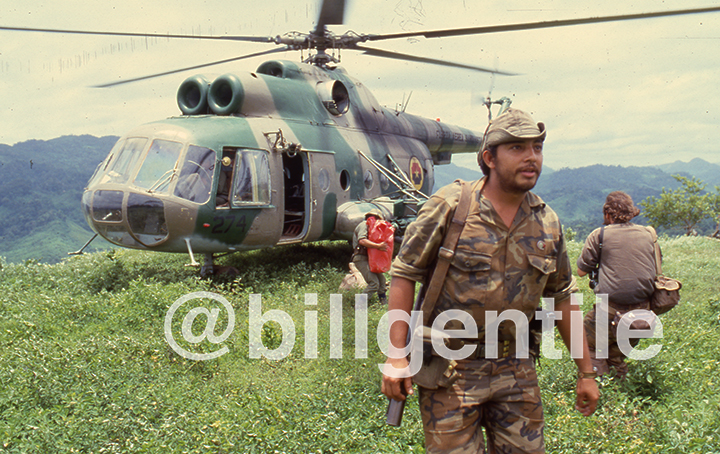 WASLALA, Nicaragua — Miami Herald photographer Murry Sill and I are hanging around Waslala waiting for this Sandinista Army offensive to happen. There isn’t a hell of a lot to do in Waslala, which is less a town than just a bunch of houses lined up on both sides of a muddy mountain road. It’s a scene from a cowboy movie set in the 1800s, complete with some raggedy-ass horses but also with young men dressed in camouflage uniforms carrying lots of guns. There are some stores and what they call “restaurants” with broken-down tables and chairs arranged haphazard on uneven wooden floors but that’s it. What I do in places like this is try to establish some kind of trust with the soldiers whom I’m to accompany in the field, pick up some shots of the guys before they go out, let them get used to the cameras, keep my clothes and equipment clean and dry, not get sick on the local cuisine and not run out of cigarettes and granola bars that are part of the reason why a lot of these guys put up with me in the first place.

So we’re just lounging around outside a building where Talavera and some of the other commanders are talking strategy when this dark-skinned guy with a bit of a pot belly and straight but unkempt jet-black hair lumbers over to us and demands, “Quiénes son ustedes?” (“Who are you?”), and the first thing that runs through my head is this guy has some authority plus attitude regarding Americans (with good reason) and is going to 86 both of us from the entire operation and say, go back to Managua you don’t have proper authorization to be here.

So I respond with, “Quién es USTED?” (Who are YOU?) and he says, “Contrainteligencia Militar.” (“Military Counter-Intelligence.”)

Sill and I whip out our government-issued IDs and while this guy is looking them over I’m trying to be as nonchalant as possible so I start trimming my fingernails with the scissors on my Swiss Army Knife. This guy looks over the top of the documents and sees what I’m doing and yells, “NO!” He goes on to tell me that if we’re going into La Montaña with the troops, we’ll need everything we have in order to deal with the place. Yes, even our fingernails.

Turns out the guy’s real name is Augusto César Pineda, but everybody calls him “El Cuervo,” or Cuervo for short, which is Spanish for “crow.” Soldiers often give each other noms de guerre and they called this guy Cuervo because of his wild “caw, caw, caw” kind of laugh that resembled the high-pitch call of the bird of the same name.

Cuervo and I were so suspicious of each other in the beginning that I’m surprised we ever got to be friends. But we did. Big time.

In the photo, El Cuervo walks away from helicopter bringing goods to Sandinista soldiers. Miami Herald photographer Murry Sill is seen, back turned to camera, on the right. Copyright photo by Bill Gentile.