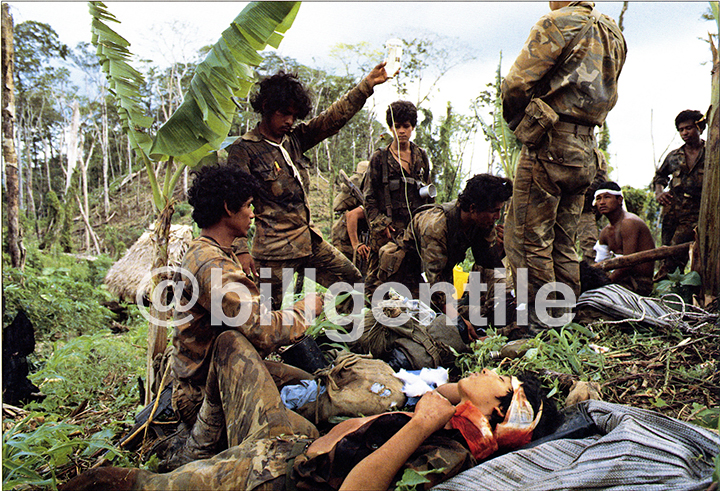 MULUKUKÚ, Nicaragua — We had been hanging out with the Sandinistas for only a few days so we were still fresh, not yet strung out from fatigue, lousy food, exhausting days, uncomfortable nights, tension and fear. We were ready. Or as ready as you can be, to nearly get killed.

Mexican photojournalist Arturo Robles and I were up in the northeastern part of the country following rumors of heavy fighting in that area, on Nicaragua’s eastern plains that run from the foot of the central mountains to the Atlantic Coast in the department of Zelaya. We had left Managua before dawn, La Bestia loaded with gear and supplies. La Bestia, my 1969 International Harvester Scout, the muscle machine that got us around the country. This thing had eight cylinders, four-wheel drive, dual exhaust, twin gas tanks, manual gear shift on the floor and a carburetor the size of a nuclear power plant all under a fire-engine red coat of hardened steel. I named it La Bestia, (The Beast), after a headline in one of the local newspapers reported an attack by the “bestias,” or contras, up in the north.

Arturo loved scavenging through the music cassettes I carried in the glove compartment. The music that Claudia and I enjoyed on our trips to Masachapa.

“Quien ponemos?” I routinely asked Arturo. “Who do you want to hear?”

“Las Hermanas Pointer,” would sometimes be the response. “The Pointer Sisters.”

Because Mexico was the only country in the Western Hemisphere that refused to join the U.S. economic blockade of Cuba, Mexicans like Arturo were given special consideration by revolutionary groups in the region. Arturo was accepted by the Sandinistas as well as leftist guerrillas in El Salvador.

What mattered to me was that we worked together like madmen. He was smart and just about fearless and I knew I could depend on him when things got hairy. And we covered a lot of hairy stuff not just in La Montaña but also in the mean and deadly streets of El Salvador. As a bonus, Arturo had a wry sense of humor that made him one of the funniest people I had ever met.

I didn’t see a thing. The forest at the top of the hill exploded and everybody either throws himself to the ground for cover or falls to the ground because he is hit. I hear somebody shouting orders and Arturo and I follow guys up the hill, all of us slipping and sliding over the soft mud, the soldiers crouched over and weapons facing upward, nobody knowing what we’re moving toward because it’s like the trees and the bushes are shooting at us. Where the f**k is the “enemy?”

NOTE: The excerpt above is one of a series preceding the release of my memoir, “WAIT FOR ME: True Stories of War, Love and Rock & Roll.

NOTE: In the copyright photo by ©Bill Gentile above, members of the Sandinista Peoples Army recuperate from an ambush by U.S.-backed “contra” forces.