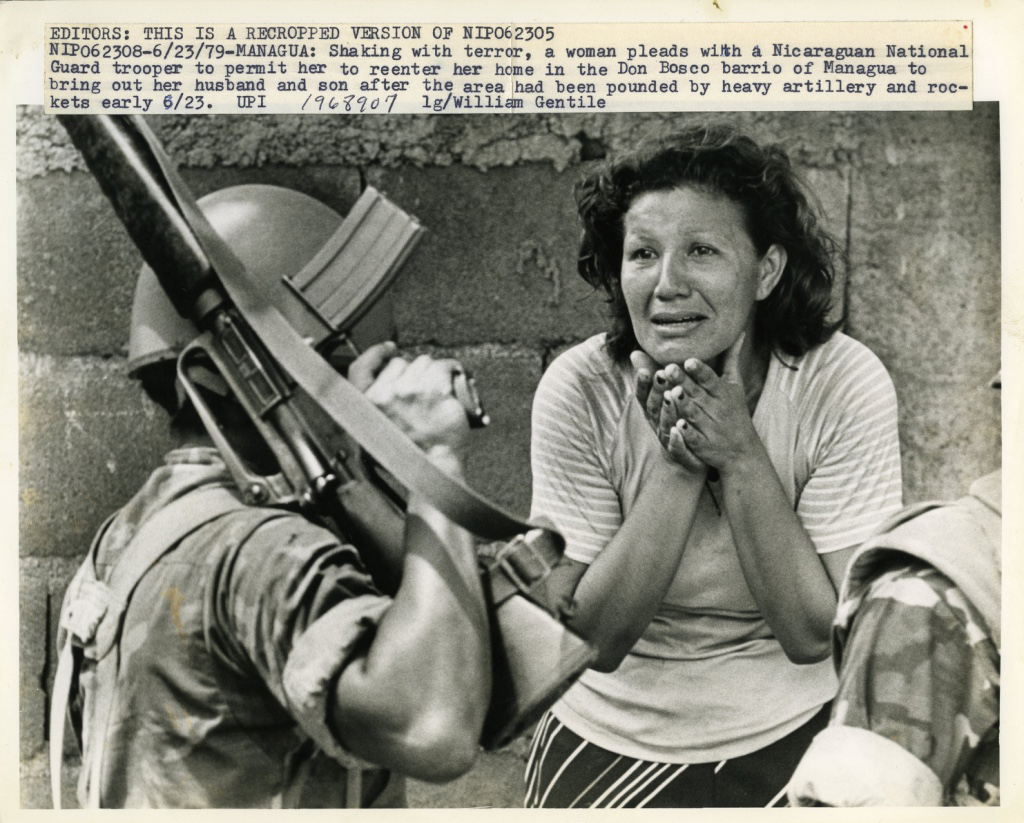 WASHINGTON, DC, Day 3 of 40 — Look closely at the caption on this photo. Toward the end you will see “lg/William Gentile”

The “lg” are the initials of the person who wrote this caption. The “William Gentile” is, of course, is my real, formal, name. Now I use the abbreviated form of “Bill” on captions and bylines.

I made this picture not long after launching my career as freelance foreign correspondent in 1977, when I moved to Mexico. I made it during the 1979 Sandinista National Liberation Front (FSLN) “Final Offensive” to overthrow the brutal, rapacious dictatorship of the Somoza family in Nicaragua. At the time I was working as a freelance foreign correspondent for United Press International (UPI).

I was following the well-worn path of many freelancers before me, a formula revealed to me by Professor John Wilhelm, dean of the School of Journalism at Ohio University in Athens, Ohio, which is where I attended graduate school. At the time, freelancing was a path on the way to a staff position with one of the many U.S. news bureaus overseas. And here’s the formula:

“Study a country or a region of the world that is generating enough news that you can cover, where you can afford to live, and where the competition is not overwhelming. Make contacts with media outlets in your home country to offer your services. Save enough money to survive in your target country for at least six months. Buy a plane ticket. Get on the plane. Go.”

I still teach this same formula today in the class that I created for American University. It’s called, Foreign Correspondence. And some of my students have followed that path — successfully. (And I’ll tell you more about freelancing in future posts.)

Not long after covering the Sandinista offensive in Nicaragua, UPI brought me on as staff in the Mexico City bureau. And although I would return to freelancing over the years, my coverage of that conflict remains a pivotal turning point in my professional career and in my personal life.

Oh, back to the caption. It was written by Lou Garcia, the regional UPI photo editor at the time. The “lg” are his initials. I spent most of my days running from flash point to flash point during the FSLN offensive, periodically heading to our hotel to drop off rolls of black and white film to Lou, who would process, print and transmit my images to the UPI headquarters in New York. Lou and I have stayed in touch over all these years. In fact, Lou and his wife, Laurie Kassman, live just across the river in Virginia.

They attended the screening of my upcoming documentary series, FREELANCERS with Bill Gentile this past weekend. At the screening, we launched an Indiegogo campaign to gather funds for post-production. Click HERE to see.