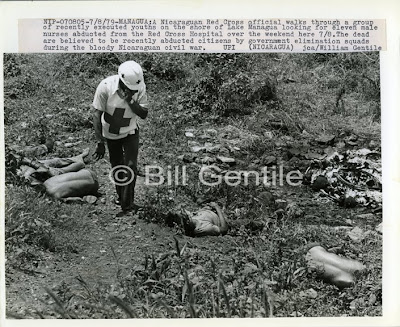 8 JULY 1979 — Unlike the September 1978 insurrection that briefly rocked the country, the 1979 Final Offensive was an all-or-nothing slugfest, and most Nicaraguans seemed to understand this. The Sandinistas poured everything they had into steering, and staying ahead of, the popular insurrection to topple the Somoza regime. And the regime fought back with all the might it could muster.

With the insurgents gaining ground across the country, the increasingly desperate Somoza, his National Guard and civilian vigilantes lashed out at their enemies – both real and perceived. In the picture above, a Nicaraguan Red Cross official examines bodies of young men dumped like garbage off the side of a road leading out of the capital. The official was looking for hospital workers who had been abducted, presumably by government-backed death squads, for suspected collaboration with “the enemy.”

It was a terribly dangerous time for all Nicaraguans.

The final days of the Somoza regime remind me of something that Dr. Alberto Baca Navas once told me. A brilliant Nicaraguan attorney and father of my first wife, Claudia, Dr. Baca Navas said: “Los últimos coletazos de una ballena herida son los mas peligrosos.” Or, “The last flailing of a wounded whale is the most dangerous.”

As I re-watch the slow, violent demise of one of Latin America’s most notorious dictatorships, I know that he was right.