An Exclusive Interview in Rebel Territory 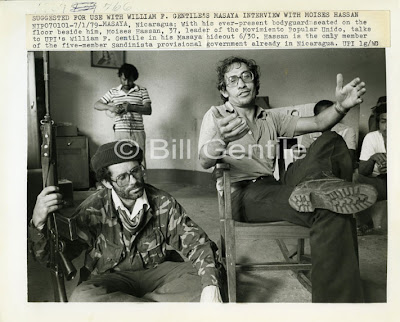 1 JULY 1979 — Moises Hassan, the only member of the five-person Junta of National Reconstruction already in Nicaragua while fighting still raged across the country, talks about the future during an exclusive interview with myself and colleague Leif Skoogfors. Leif and I were the only two American journalists to have gained access to Masaya where Hassan was held up.

A short drive from the capital, Masaya by this time was largely under control of the Sandinista National Liberation Front, whose fighters had taken it from the National Guard of Anastasio Somoza. But talking our way through the many lines of battle and checkpoints that ringed and dotted the city was a formidable task. Not yet fluent in Spanish, I nevertheless had enough of the language to get us both through.

As we drove back to Managua after the interview, Leif and I knew we had an important scoop. We were riding so high I couldn’t even feel the road beneath us.