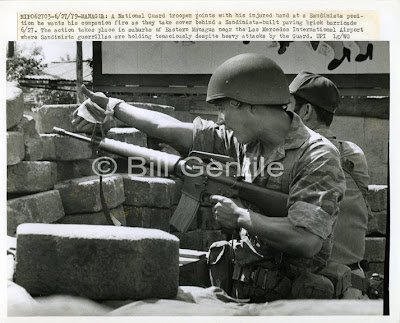 27 JUNE 1979 — Members of President Anastasio Somoza’s National Guard fire at Sandinista insurgents during heavy fighting along the contested northern highway leading from the capital of Managua to the international airport. As in too many of these conflicts, this war pitted neighbor against neighbor, family against family, brother against brother. While reviewing these images that I made three decades ago, I am struck by how much the combatants from opposite sides of the firing line resemble each other.

One of the defining characteristics of this, and other conflicts in Central America, was the fact that journalists like myself were able to move across battle lines from one group of combatants to another, allowing us to cover both sides of the conflict. This also made our job exceedingly dangerous, as this fluidity also meant that we sometimes were caught in the line of fire between the two. And this is how too many of my colleagues were killed.