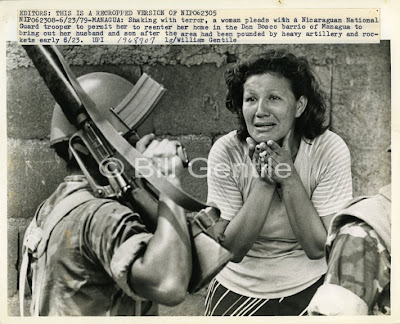 23 JUNE 1979 — Civilian casualties during insurgency and counter-insurgency operations are a key characteristic of those conflicts. The Sandinista Revolution in Nicaragua was no exception. In the photo above, a woman pleads with a National Guardsman for permission to return to her Managua “barrio” to find her husband and son, both trapped in their home during aerial bombardment by government forces trying to rout Sandinista guerrillas. Some 30,000 Nicaraguans, too many of them civilians, perished during the six-week conflict to oust the Somoza regime.

If you look closely at the caption, you see the initials “lg.” These belong to Lou Garcia, who wrote the caption and who oversaw UPI’s photo coverage of the conflict. A great friend, Garcia also is one of my mentors. It was from Garcia that I learned — among many other things — the importance of writing skills, even for journalists who make their living with a camera.

The image making and storytelling skills I acquired during this conflict laid the foundation of my role today as a backpack journalist. As we mark the 30th anniversary of the Sandinista Revolution, I’m posting scans of some of the original images I made for UPI during that war, and explaining their significance. I do this in recognition and gratitude to the country and people who have given me so much. Thank you.