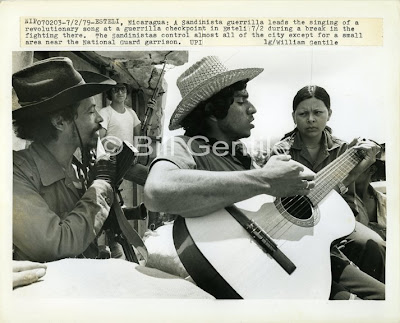 2 JULY 1979 — I traveled to the northern city of Esteli, the scene of ferocious fighting between government forces and insurgents struggling to defeat them. In the picture above, a Sandinista rebel serenades his “companeros” during a lull in the battle.

By this time fighting had spread to population centers across Nicaragua. The foreign press corps — or what was left of it after the evacuation prompted by the killing of ABC correspondent Bill Stewart — was stretched thinner and thinner as we tried to follow, anticipate and cover events over an increasingly large geographic area.

Vastly outnumbered by our competitors, UPI nevertheless performed admirably, with steady, fast and accurate coverage. This was due, to a very significant degree, to the efforts of one man. His assistance to our operation was so essential, and we were so concerned that our competitors would discover and lure him away from us, that we were forbidden even to mention his real name. We were allowed to refer to him only as: “El Hombre,” or “The Man.”

What made him so crucial was that, in his home, he had a shortwave radio system that enabled him to listen in on conversations between Nicaraguan President Anastasio Somoza and his military commanders in the field. So when the guardsmen prepared for an attack, or suffered casualties, or needed ammunition, we at UPI knew it — because “El Hombre” had told us so.

“El Hombre” was Don Leonardo Lacayo (I still use the Spanish formality of “Don” to refer to him) our very own stringer who somehow had kept the radio system a secret. When I moved to Nicaragua in 1983 to cover the Contra War, I employed the aging “Don Lacayo” to keep me up on current events and on background. He was an important source when I researched my book of photographs, “Nicaragua.” Don Lacayo passed away not long after I left Nicaragua in 1990. For all your help during my stay in your country, Don Lacayo, mi gran amigo, muchas gracias.