“Freelancers at Risk” at American University

WASHINGTON, DC, 29 March 2015 — We had an overflow attendance at yesterday’s event, “Freelancers at Risk,” at American University’s School of Communication. In this first image above, from left to right, are Michael Scott Moore, Berlin-based journalist kidnapped by Somali pirates while researching a book on piracy and held hostage 2 years, 8 months before his release in September 2014; Allison Shelley, independent documentary photographer and multimedia journalist whose work has been featured in Time, The New York Times, The Atlantic, The Wall Street Journal, among others; Jason Motlagh, writer, photographer and filmmaker covering issues from human rights and labor issues to conflict zones for outlets including The Washington Post, Economist and al Jazeera; and myself as moderator at the lectern.

The two images at bottom show, from left to right, David Rohde, Pulitzer Prize-winning journalist, Thomson Reuters investigative reporter, and Pulitzer Center Board member; Hannah Allam, national correspondent for McClatchy Newspapers covering foreign affairs and the State Department and formerly the chains Baghdad bureau chief; and Frank Smyth, founder and executive director of Global Journalist Security and a senior advisor for journalist security at the Committee to Protect Journalists. This second panel was moderated by Jon Sawyer, executive director of the Pulitzer Center on Crisis Reporting, at the lectern.

The two-hour event was all about how freelance journalists can keep themselves safe and healthy while working overseas. 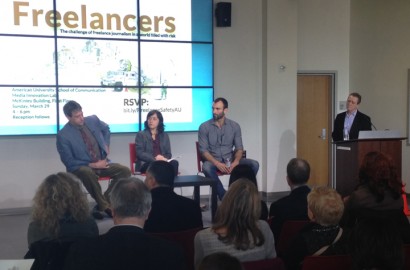 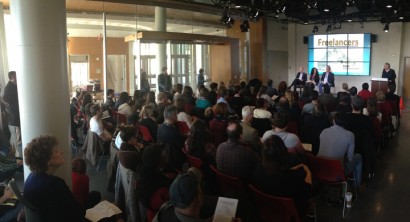 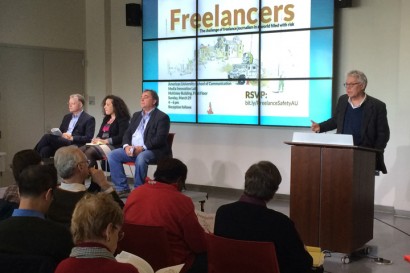