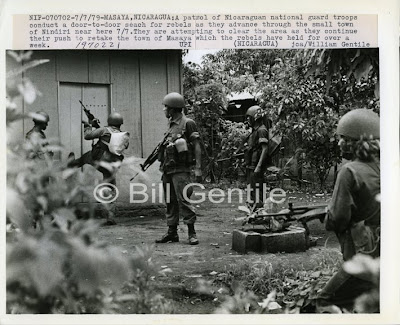 7 JULY 1970 — It was clear to most observers at this point in the conflict that the Somoza regime had lost the hearts and minds of the Nicaraguan population. Somoza’s National Guard had become an occupying force in its own land, and most ordinary Nicaraguans regarded its members with profound fear and loathing. And the tactics displayed in the photograph above only hardened the hearts of a people that had endured the abuses of the National Guard for far too long.

Check this blog later today for an image that speaks volumes about the extraordinary disconnect between a people and the armed force that was supposed to serve and protect them.