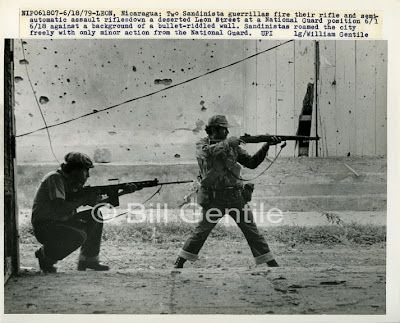 18 JUNE 1979 — Working from a hotel in Managua during the weeks-long insurgency to oust the Somoza dictatorship, I traveled from city to city in Nicaragua, following reports of fighting. In the picture above, Sandinista fighters fire down a street in the city of Leon at National Guard positions. Leon was the scene of ferocious battle during the insurrection. As we mark the 30th anniversary of the Sandinista Revolution, I’m posting scans of some of the original images I made for UPI during the conflict, and explaining their significance. I do this in recognition and gratitude to the country and people who have given me so much. Thank you.