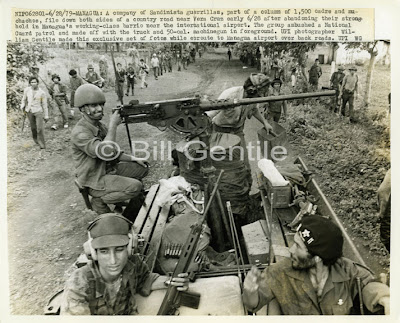 28 JUNE 1979 – This is what I witnessed as I drove over back roads early on the morning of 28 June 1979 to drop a colleague off at the airport. Hundreds of Sandinista fighters and supporters retreated from Managua because, as one of them said, the civilian population was being hammered by government forces’ indiscriminate bombing and artillery raids on their positions. The operation began before dawn. The Sandinistas retreated to the nearby city of Masaya, which was under their control.

Of the few foreign journalists still in Nicaragua following the evacuation prompted by the killing of ABC News correspondent Bill Stewart, I was the only one to have made pictures of this retreat.