Somoza: “We Won’t Bother Them…” 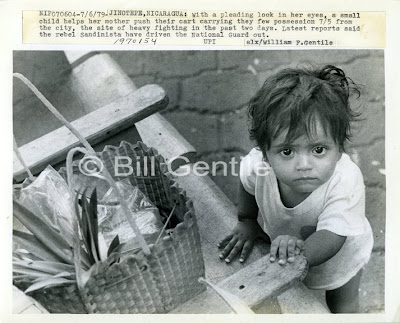 6 JULY 1979 — The civilian population in any conflict suffers the most, and the conflict in Nicaragua was no exception. Caught in the middle of two armed forces, civilians struggle for the basics to survive. Food. Water. Shelter.

And they struggle not to incur the suspicion or the wrath of the contending forces. Human rights organizations around the world accused Somoza’s National Guard of routine, summary executions of Nicaraguan boys and men suspected of collaborating with Sandinista insurgents. As the war dragged on, we documented the civilian population fleeing their homes to take cover anywhere they could.

On the road to the city of Leon myself and colleagues stopped at a school that had turned into a refugee camp run by American nuns. The nuns told us that the National Guard had come by a number of times looking for Sandinista insurgents hiding out among the refugees. And government planes had been flying overhead, a little too close for comfort. These were the same small planes that Somoza had been using to rocket and bomb poor “barrios” in Managua. The nuns were worried.

That night, back at the hotel where the foreign press corps was staying, I called President Somoza’s bunker — and actually got him on the line. I told him that I had visited the school, that there were no Sandinistas hiding out there, and that the nuns were concerned for everybody’s safety.

“We won’t bother them if they don’t bother us,” the president of Nicaragua told me.

A few days later I returned to the school to pass on Somoza’s message. The nuns were elated. After the war one of the nuns sent me a copy of her order’s internal publication, in which she had written about the incident and mentioned me by name.

I had sporadic contact with the nuns after that, as some of them stayed on in Nicaragua after the war, but we eventually lost track of each other.