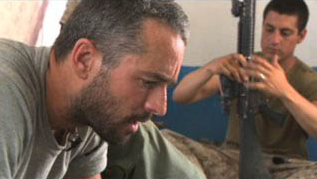 WASHINGTON, DC, 18 March 2011 — While embedded with the 24th Marine Expeditionary Unit (24thMEU) in Afghanistan in 2008, I made a brief video of New York Times Photojournalist Tyler Hicks as he prepared and then transmitted images from one of the most unforgiving locales on earth to the Times photo desk in New York. Posted on my Vimeo channel, Backpack Journalist, you can see the video here. You can also watch the piece on YouTube, here. At the time I met Tyler, I was working on a piece in Afghanistan’s Helmand River Valley, along the border with Pakistan, for NOW on PBS. (Titled, “Afghanistan: The Forgotten War,” the piece was nominated for a national Emmy Award.) I think the video of Tyler at work illustrates the technology that has revolutionized the craft of journalism. More importantly, it gives viewers a sense of how professional, articulate and dedicated some of the practitioners of our craft can be. Tyler Hicks is an extraordinarily talented photojournalist and a role model for all who want to enter the craft. The Times reported today that Tyler, along with three other New York Times employees, are scheduled for release by Libyan forces who captured them while the journalists were covering events in that north African country. I am delighted to hear this and I hope that release happens immediately.