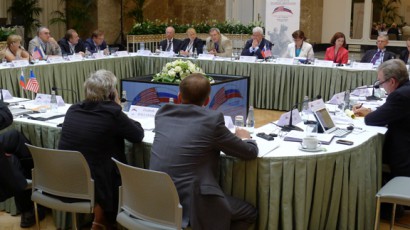 ST. PETERSBURG, Russia, 2 August 2013 — This is the last round of talks at the 4th meeting of the U.S.-Russia Bilateral Presidential Commission (BPC) Sub-Group on Mass Media. I had the privilege to be invited to the event, which took place in this city, rich in history and culture.

Backpack video journalism is the craft of one properly trained practitioner using a hand-held digital video camera to tell character-driven stories in a more immediate, more intimate fashion than is achievable using a conventional, shoulder-held camera and a team that includes camera person, sound person, correspondent and producer. It intends to impact public opinion by participating in the dialogue that we call journalism. Because of changes in the technology used to create journalism, changes in methods of content delivery to the audience, and economic pressures to streamline news-gathering costs, video journalism has arrived as an alternative process for creating documentary-style narrative journalism.

Though Russian media employ video, its use does not seem to have permeated the culture as much as it has in the United States. Perhaps this is a function of the fact that the Russian culture is so steeped in literature.

For my presentation, I pulled some statistics from YouTube to impress on the attendants the ubiquitous nature of video in American, and other, cultures. Check out these numbers, which I read to the delegation:

To drive home the points I made during the presentation, I screened two pieces made by Cuban students during one of my video journalism workshops in Havana, during fall semester 2011. You can see the videos here:

These two films cut straight to the heart of why we filmmakers do what we do. We do it because of an insatiable need to communicate. To connect. To Create. To share. To have an impact. And video is increasingly the medium with which citizens of the world choose to do so.

Because of the deep historical, economic and political ties between the former Soviet Union and Cuba, I feel the films resonated deeply with our Russian hosts, who proved to be extraordinarily gracious and generous. I am forever thankful to them for a deeply gratifying visit.