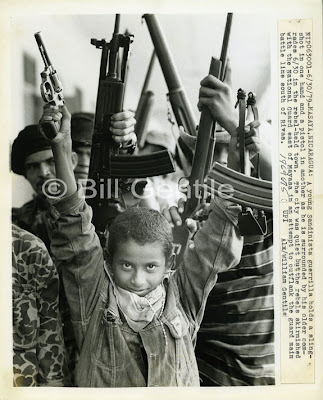 30 JUNE 1979 — After their strategic retreat from Managua, Sandinista fighters and supporters occupy the nearby city of Masaya, one of numerous population centers slipping out of government control. For the first time since launching their “Final Offensive” against the U.S.-backed Somoza dictatorship, jubilant Sandinistas now see the possibility of victory.

In the early days of Masaya’s occupation, myself and colleague Leif Skoogfors, a photojournalist on assignment for Newsweek Magazine, were the only two American journalists to gain entry into the still-contested city. There we met and interviewed Moises Hassan, the only member of the Junta of National Reconstruction designated to take the reigns of power in the event of a Somoza ouster. Check this blog tomorrow for a picture of Hassan at his command post.