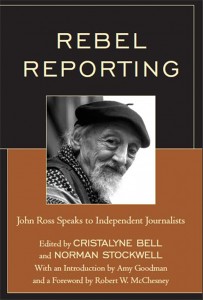 FOLLOWING IS A REVIEW THAT I WROTE RECENTLY FOR THE RECENTLY PUBLISHED, “REBEL REPORTING,” ABOUT JOURNALIST AND ACTIVIST JOHN ROSS. YOU MAY FIND IT INTERESTING:

“Rebel Reporting” took me back to the place where I began working my craft: Mexico and Central America, during what I refer to as, “The Golden Days of Journalism,” when the craft still was about information as opposed to entertainment, and when the men and women who practiced the craft believed that information can make a difference.

Edited by Cristalyne Bell and Norman Stockwell, “Rebel Reporting” is a collection of lectures to independent journalists by John Ross, whose life and work embody that tenet.

“The first thing you need to know is that you do not have a career in
journalism,” Ross advises in one of those lectures. “Forget about your career. You have an obligation—to tell the story of those who entrust you with theirs, to tell the truth about the way the world works.”

Ross’ presentations follow the course of history, and the issues that he covered along the way. His words ground us. They remind us how the world has changed. They warn us. They advise us how to respond.

He says, “Refugee camps are excellent places from which to do anti-war correspondence. Everyone has a story to tell. Refugees know about these wars firsthand. Probably better than anyone outside of the dead. They have survived.”

And he issues a warning, especially to those of us who cover conflict, of complicity in perpetuating conflict:

“We love war.
We recoil at its horrors
But always find the words
To speak the unspeakable.
We are its whores.
Peace makes us feel
As if we have no place anymore
In a world that demands
Cruelty and credibility
All in the same breath and byte.
We file our stories
In a universe
That does not flinch.”

“Rebel Reporting” sounds the alarm on the ills that infect our societies today, including the slow-motion coup of democracy by corporate and special interests, the decimation of the middle class, the criminalization of peaceful dissent, the militarization of police forces to crush that dissent, to name just a few.

“It’s the fourth world war,” he says, “and our only weapons are our words.”

On recompense, Ross offers the following, somewhat of a caveat to journalism students like my own:

“The coin of our realm is passion. While corporate journalists bask in the bland neutrality of their vaunted ‘objectivity,’ dabbling in a language drained of all outrage for fear of damaging their career track, rebel reporters, who know only too well they have no careers but rather a responsibility, are paid off in passion – passion for language, passion for telling the story with passion, passion for struggle and change, for sharing spirit, solidarity.”

Thank you, John Ross, for taking me back to where I began, and to where we all should begin again.