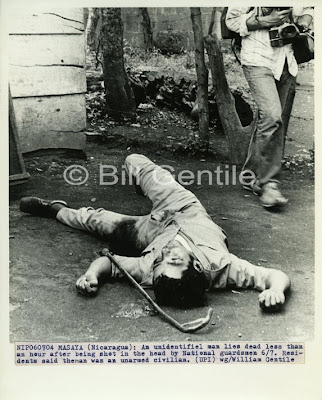 7 JUNE 1979 — Before covering the Sandinista Revolution in Nicaragua, I had rarely seen dead people outside of funeral homes — much less made pictures of them. But in the summer of 1979 I made lots of pictures of dead people. I still see some of them today in my mind’s eye. On June 7 myself and a colleague came across this dead man in the city of Masaya who, according to residents, was shot in the head by a National Guardsman. As we mark the 30th anniversary of the Sandinista Revolution, I’ll be posting scans of some of the original images I made for UPI during the conflict, and explaining their significance. I do this in recognition and gratitude to the country and people who have given me so much.