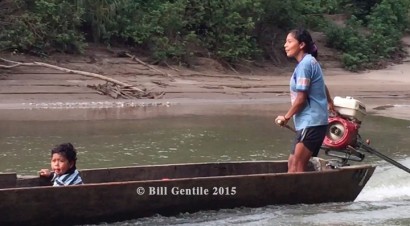 BOBONAZA RIVER, Ecuador, 29 June 2015 — On the journey to the indigenous region of Sarayaku deep in the Ecuadoran Amazon, I took a five-hour canoe ride down the Bobonaza River. I saw dozens of canoes, run mostly by male “pilotos” and “punteros” (pilots and pointers.) A female pilot was somewhat of a rarity. This woman and her passengers were fighting their way upriver, quite an ordeal in very low waters.

The trip to Sarayaku is especially timely because of the Vatican’s recent encyclical defending the environment and the poor. Pope Francis on Sunday 5 July landed in Ecuador on the first stage of a three-country visit to South America, bringing with him the Vatican’s message of concern for society’s most defenseless and the world they live in.

The journey to Sarayaku came at the tail end of a three-week trip to the region. I was on assignment for American University’s (AU) Center for Latin American and Latino Studies (CLALS), and charged with producing a short film on religion and the environment. I’ll keep you up-to-date on the post-production as it unfolds.

Because I anticipated some difficult conditions in the jungle, I trimmed down the gear and shot the film with an iPhone 6+, equipped with the FiLMiC Pro app, and directional as well as wireless microphones, which I used interchangeably. I had to buy some other gadgets, as well, and I’ll discuss that in later posts, so stick with me as I review the material.